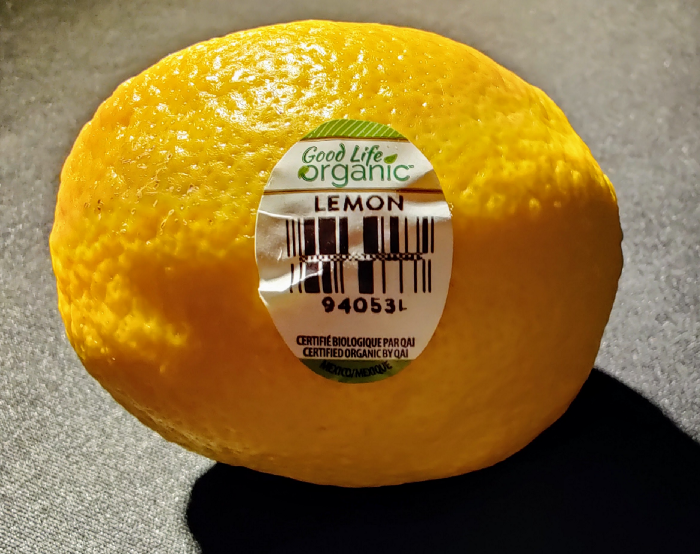 This is a picture of a simple lemon that I bought in the grocery store the other day. This particular brand of lemon is really juicy. It’s also an organic lemon which is important if you are going to use some of the rind for zest in your salad dressing recipe.

I was curious why every lemon had a little sticky tag on it with a barcode. I could understand the tag, it had the brand name and reassured me that the lemon was organic. A quick barcode lookup showed that this was a stacked (RSS 14) code designed for space constrained applications such as point of sale applications. Digging a little deeper, we find a supplier identifier – 729062 which identifies the supplier as Vegetable Fresh Farms in California. The remaining digits – 94053 are the PLU code for the lemon. The International Feder­ation for Produce Standards (IFPS) has standardized these codes. The first digit is a 9, which signals that the product is organic. If it was 3 or 4, this would indicate a conventionally grown entity, ie with pesticide application.

Such a simple, low-cost way to get information from a simple thing. Why can’t our Internet of Things devices meet this level of ubiquitousness and inexpensiveness ?

Despite the tremendous amount of interest in IOT technology and the development and deployment of IoT devices such as cameras, alarm systems, watering systems, health devices etc, the adoption of IoT technology as a whole has considerably lagged expectations and market estimates.

This lag arises from a combination of circumstances. Immature technology, problems with managing devices at scale. perceived and actual security problems with IoT devices (which have large attack surfaces), the lack of truly persuasive business models that address potential customer needs at an attractive price, the confusion and reluctance to invest because of the large number of competing standards.

Many of the applications that IoT enthusiasts are exploring such as logistics, paperless transactions, workflow automation etc, are real and well known in the associated industries ie, logistics, retail, healthcare and manufacturing to mention some examples.

Over the last decade the invention of the barcode and then the QR code and associated variants helped these industries transition from paper and pencil or clipboard record keeping and tracking to a level of automation and data entry / tracking through the development of barcode scanners, point of sale systems, parcel tracking stations and associated capability. The development of handheld scanning hardware broadly increased the usability of the systems and the emergence of “smart solutions” to eliminate human errors and increase productivity. The global market for these technologies was estimated at USD 6.39B in 2018 and has an estimated CAGR of 4.7% from 2019 to 2025

Some applications for this technology include:

Wow, that sounds a lot like what the Internet of Things is promising. So why don’t we have IoT lemons ?

What is missing is bridging the gap between these low end things and the cloud based enterprise infrastructure that is setup to analyze the millions of transactions generated by these solutions. What is needed is technology that truly makes IoT an Internet of THINGs, not just electronic things.

The missing link is the virtualized IoT device. This is a piece of technology that wraps these non-electronic, physical devices with the ability to be discovered, identified, and authenticated. The information about these things needs to be semantically interpretable, and this information needs to be communicable bi-directionally between the device and other end-points in the infrastructure.

Implementing the missing link is surprisingly simple. Create a proxy that makes the thing appear as though it is an IoT device, interacting through IoT protocols. Thanks to the growth of cellphones, their low price, strong communications and imaging capabilities and their programmability, we have an ideal platform for building virtualized IoT infrastructure for the ubiquitous bar/QR coded thing on the factory floor or in the store or supermarket.

There are three fundamental components that are required, first a thing identification. Next scan information such location and time stamp to capture the VIoT interaction with the thing. Finally meta-data about the thing either from the tag or by lookup in the back-end infrastructure so that fully fleshed out thing data is available as an not object to the system

Things that are to participate in this infrastructure at a minimum must possess a UUID, or if they are functionally identical and interoperable, at least a class ID that identifies the thing. The virtualized IoT device or cell-phone (VIoT) is used to scan the UUID and therefore detect the ID of the thing, and potentially its location (from a station tag or GPS) and a precise timestamp of when the thing was scanned. Depending on the density of the information on the tag, ancillary information such as a manufacturing date or other data may also be available. If the thing is a higher valued object, alternate tagging technologies such as RFID or BLE beaconing may be used to convey thing information to the VIOT. In the case of writeable tags, this transfer can be bidirectional.

Meta-data including a link to semantic type information for generated data from the thing will in all likelihood be obtained by cloud lookups based on the UUID’s, given the limited storage of thing identifiers.

The VIoT acts as a local display and interaction mechanism with the thing. Information is stored locally and depending on available communication capability immediately pushed or stored until a communications link is available.

With this in hand, we will finally achieve a true Internet of Things (including lemons).

0 Comments for “The Internet of Things Lemon”